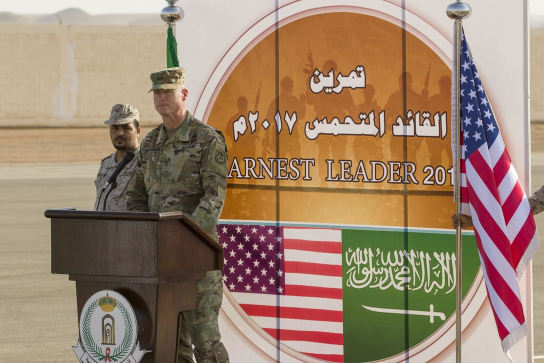 Tonight my wonderful son decided he didn’t want to eat his dinner. His belly only wanted desert he told me repeatedly. But of course, you don’t get desert if you don’t eat your dinner. So, he cried, screamed, begged and pleaded his case to no avail.

When his sister got her desert his pleas only got louder. Still, no dinner, no desert. Finally, he relented, reluctantly eating his dinner before being allowed chow down on his much-desired desert. Now imagine if I had handled that differently.

Say I made a deal with him along the lines of “if I give you your desert now do you promise to eat your dinner afterwards?”. Now every parent reading this knows exactly how this would have worked out. He would have taken the deal in a heartbeat, eaten his desert then promptly refused to eat his dinner.

It’s common sense that this strategy wouldn’t work, yet it’s exactly the type of strategy that the United States is currently deploying with Saudi Arabia. We agreed to sell them 110 billion dollars of war materials; tanks, missiles, guns, etc.… and in return we got a meager investment into our already thriving military industrial complex.

We decided to sell weapons to a nation that orchestrated 9-11 (15 of the 19 terrorists were Saudis).

And what happened in return? Saudi Arabia used those weapons to conduct human rights violations in Yemen (killing thousands of civilians, raping women, conducting torture, and using child soldiers as young as 8 according to the UN) and kill journalists in foreign countries.

And yet the United States continues to sell them weapons to bolster their military. It’s beyond time that the United States wakes up to the fact that you can’t persuade bad actors like Saudi Arabia to behave responsibly after you’ve given them their desert.